An Inventory Of Al-Mutanabbi Street

'On March 5th 2007, a car bomb was exploded on al-Mutanabbi Street in Baghdad Al-Mutanabbi Street is in a mixed Shia-Sunni area. More than 30 people were killed and more than 100 were wounded. Al-Mutanabbi Street, the historic centre of Baghdad bookselling, and heart and soul of the Baghdad literary and intellectual community, holds bookstores and outdoor bookstalls, cafes, stationery shops, and even tea and tobacco shops.

In July 2010, the poet and bookseller Beau Beausoleil put out a call for book artists to join ‘An Inventory Of Al-Mutanabbi Street’, a project to “re-assemble” some of the “inventory” of the reading material that was lost in the car bombing of al-Mutanabbi Street on 5th March 2007'...

our contribution to the project: 28 cards dedicated to lives cut short

We have dedicated these lived moments to lives cut short. Like cut flowers, they are caught in visual haiku. On the front of each card is a moment, captured by cellphone or point-and-shoot camera, in the life of one of us. Digital tracings on each image invite viewers to imagine being in the skin of that person, at that moment. On the back of each card is a photograph taken accidentally - a similar place, but with no human mind framing it.

Like the people caught in the al-Mutanabbi street explosion, we six share a cultural practice - in our case, photographic art - whose function can be to illuminate the humanity that could unite all of us. 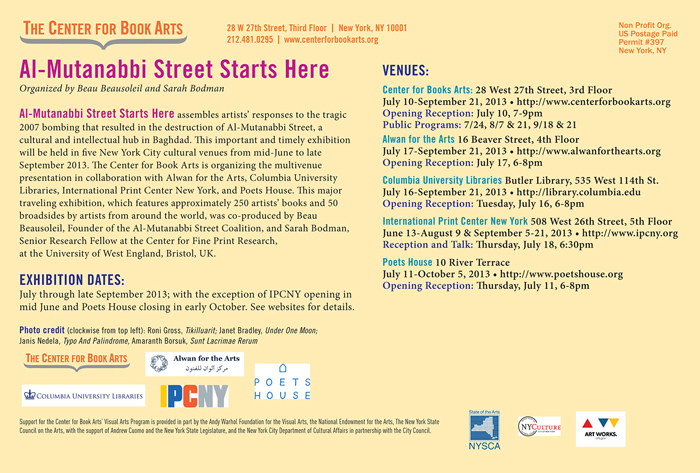 The artists, originally from Australia, Norway, Poland and the Netherlands, are associated through their involvement with Queensland Centre for Photography. Links to artists' websites: